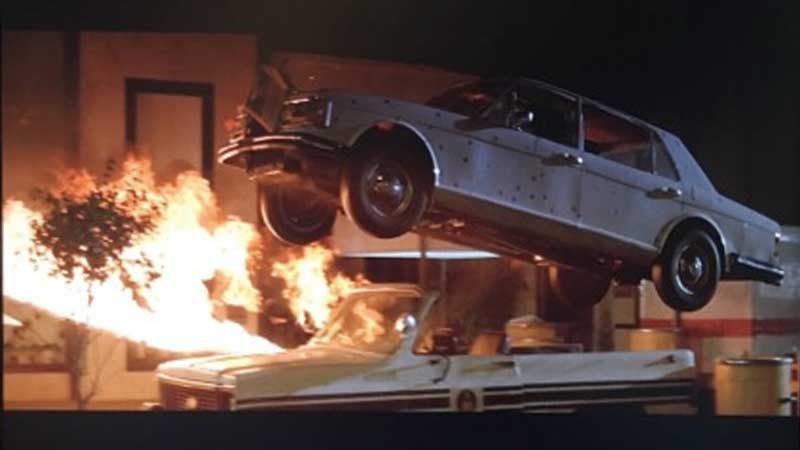 While there is a subplot involving Boomers would-be girlfriend (Jane Kozak) and her under-the-radar struggles with local crime lord Robert Masterson (Robert Davi), the movie is 90-percent focused on the battle between Boomer and the cops, which sees the wounded athlete (covering for Wahls real-life injured status) utilize a multitude of thrown weapons (he is a quarterback after all) and somehow (with the aid of cortisone shots) outrun police vehicles during a non-stop spree of destruction led by a hired assassin the ex-cops brought in, who is the T-1000 blended with the paperboy fromBetter Off Dead. Whether he is using a tank, an anti-tank gun or–in a wonderfully ridiculous sequence–a massive flamethrower, there is no structure or domicile that is safe from his New Jack Swing-styled rage. At the very least, he is a memorable villain, if not the best at his job.

Now, that sounds like a pretty good idea for a solid action movie. And in other hands and with a better script it certainly could have been. Youve got a lot of great elements, including class warfare, aDie Hard-style solo hero and a pretty big playground with opportunities for fun setpieces. Instead, the battle between Boomer–aided by a cop with a conscience in Matt Frewer–and a battalion of ruthless thugs is just a never-ending stream of explosions and bon mots (including a massive battle thats so over-the-top it earns genuine laughs). It should have been obvious from the beginning, when an excruciating six-minute title montage introduces the viewer to the exotic land of Beverly Hills, that this movie was more style than substance and loaded with padding. 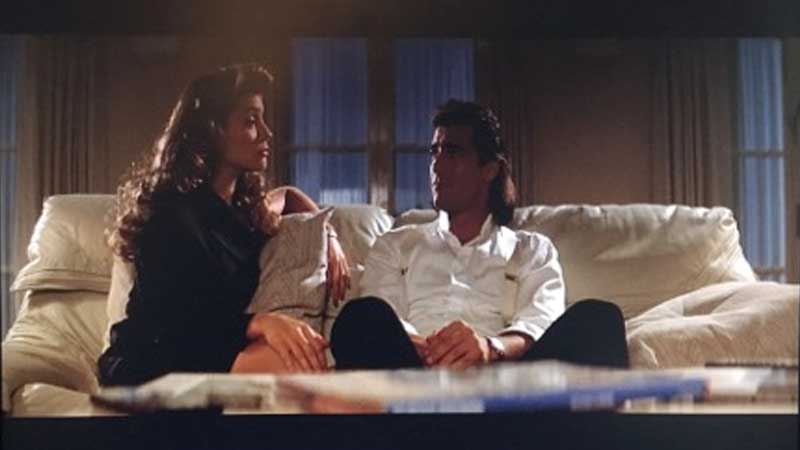 Kino didnt nab anyone involved in the film to sit down and chat, but there is a commentary courtesy of film historian Howard S. Berger and Furie biographer Daniel Kramer (who notes he devoted an entire paragraph of his book on Furie toThe Taking of Beverly Hills). The track serves as an opportunity for the two men to discuss Furies work on the whole, and offer something of a defense for the film. Theres nothing egregious about their perspective and they readily admit the issues with his later work, and in the end they make a good case for Furie as a filmmaker. The only sin here is attempting to elevateLadybugsas a film worthy of analysis. Sorry, but just cant buy that.

Note: Images in this review are for illustrative purposes only, and do not reflect the quality of the disc.

The Taking of Beverly Hillsis a big, dumb action movie, but its not big enough to be legitimately exciting, and not dumb enough to be enjoyed ironically. As a result, it rests as merely comfortably mediocre, the kind of film you might stay tuned to if you spotted it on Cinemax, but not seek out for any reason. Kino has once again delivered the kind of presentation that well exceeds the quality of the film, including an entertaining and info-filled commentary. Wahl fans will have a better time here, there a few laughly rediculous moments and the commentary is worth a listen, but most can find better ways to spend their time.

Likes:a dumb action movie once in a while

The audio is presented via a DTS-HD Master Audio 2.0 track, which is right for the time of the production, but a shame considering all the action and heavily 90s soundtrack, featuring the likes of Faith No More, Cathy Dennis, Tony! Toni! Ton! and EMF. Voices are consistently clear, while sound effects are properly prioritized in the mix for an action film. Theres nothing to complain about this presentation, but its not exactly impressive either. 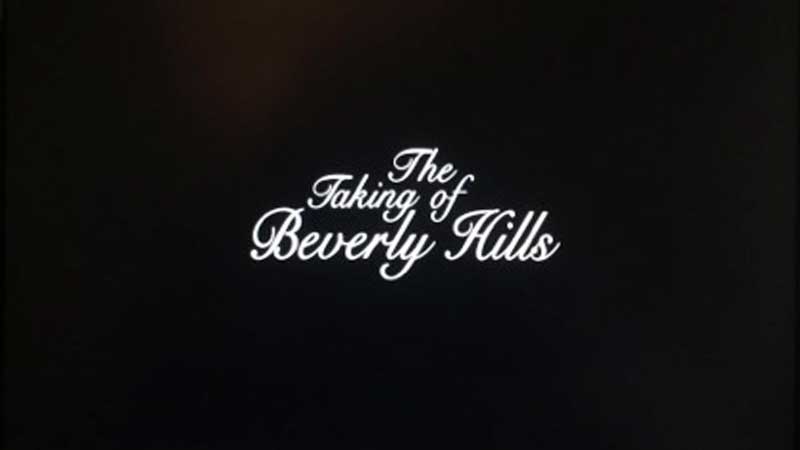 In addition to the previous busts, he is also responsible forThe Taking of Beverly Hill, the 1991 film he directed and co-wrote. Director of a slew of testosterone-heavy films over the course of the past four decades, including the somewhat well-known 80s relicIron Eagle, Furie was a bit of an auteur of the nonsensical explosions-and-quips genre. And thats just what this film exemplifies, asWiseguystar Ken Wahl dons a mullet as injured pro-football quarterback Boomer Hayes and takes on a corrupt group of ex-cops using a faked chemical spill to pillage the rich residents of Beverly Hills they once protected. 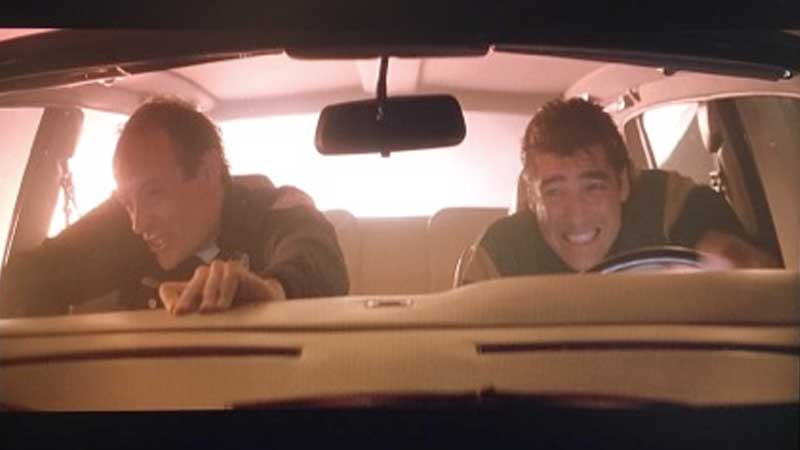 The 2.35:1, 1080p, AVC-encoded transfer here is certainly not from any kind of new master, but its not a bad presentation, with solid color (even though most of the film takes place in the dimness of night) and a good level of fine detail (most notable in the films signature explosions). Even when dark the film is still well defined, with deep black levels. Theres some jitter early on, but overall the transfer is rather good and mostly free of dirt or damage. If you want to see how bad it could look, check out the trailers in the Extras.

Francis Rizzo IIIis a native Long Islander, where he works in academia. In his spare time, he enjoys watching hockey, writing and spending time with his wife, daughter and puppy.

Some filmmakers are one-hit wonders, putting out one defining film and then slipping away into obscurity, likeSky Captain and the World of Tomorrows Kerry Conran. Others cant help but make one great film after another, like Paul Thomas Anderson. Then there are others whose careers have a split personality, like Sidney J. Furie. If you dont know the name, you can be forgiven. But he has a definite spot in film history, with a number of notable movies to his credit, includingThe Ipcress File,Lady Sings the Blues,The EntityandThe Leather Boys. He also has the far larger and less honorable distinction of being the dismissed original director ofThe Godfather, and has his name attached to a slew of some of the most incomprehensible films of modern cinema, includingThe Jazz Singer(as the replaced original director),Superman IV: The Quest for PeaceandLadybugs.

*The Reviewers Bias section is an attempt to help readers use the review to its best effect. By knowing where the reviewers biases lie on the films subject matter, one can read the review with the right mindset.

The Taking of Beverly Hills (Blu-ray)

Kinos Studio Classics line bringsThe Taking of Beverly Hillshome on one Blu-ray disc, which is packed in a standard keepcase with one of Kinos great visual catalogs. The films poster art is on the front, while a very posterized version of Wahl is found on the discs static menu with options to watch the film, select scenes and check out the extras. There are no audio options, nor are there subtitles.

Its hard to say if Wahl is bad in this role or if the role is just poorly written (the football-themed taunts and comebacks he flings along with his Molotovs are exquisitely painful) but when you consider how little there is to the other characters in the film, you have to give Wahl the benefit of the doubt. Kozan is a slight step up on the average action-film girlfriend and Davi is doing his best Davi bad guy, but you could put a bunch of mannequins in the rest of the roles and get a similar result. Theres no character development for Boomer, no heightening of the stakes and no change in the challenges. Even any comeuppance Boomer managers to deliver is brief and silly. No amount of explosions could cover for the paucity of story in this film, but bless Furies heart, he was going to try.