Before we begin, we must remind you that which came first is not our concern. The glory is in the

A big scary monster whos really a big softy on the inside teams up with his diminutive, wisecracking friend to save the girl.

a wee fish in a big pond who battles jellyfish and befriends a vegetarian shark.

A lion, giraffe and their animal buddies are forced to leave a New York City Zoo when they follow a friend out of the big apple and onto a boat bound for Africa. 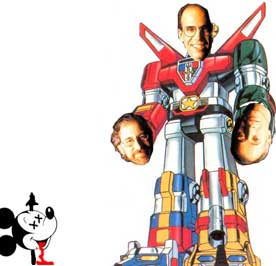 , not a childrens game of chicken-or-the-egg. Remember,

Okay, this may be stretching it, but the lead character

The Disney-Dreamworks Feud: Antz vs. A Bugs Life to The Wild vs. Madagascar

Not all films released by Dreamworks/PDI or Disney/Pixar are duels.

The Road to El Dorado versus The Emperors New Groove

lives in a sea anemone and lost a parent to predators. (Yeesh, this is really stretching the boundries of fun fact, isnt it?)

became the third highest grossing movie of all time. (At the time of writing, Disneys best effort,

We all know that Chris Farley was originally cast as Shrek, but did you know that after being hired as a replacement–years into the project–Mike Myers decided to re-record all of his dialog in a Scottish brogue?

Chameleons color-changing abilities are not so sophisticated.

, Jeffrey Katzenberg asked for a promotion. No can do. Katzenberg swore revenge and founded Dreamworks along with Steven Spielberg and David Geffen. Within ten years, Dreamworks

The darlings were excised from the final cut, but you can still read them on DVDs with subtitles based on the original script.

was based on predates either film. Then again, the book

Halloween: Resurrection – Movies so Bad, they HAD to Reboot the SeriesTrick or treat, !@$! – Busta Rhymes. Who was in this movie. For some reason.

Its as if both companies were told to make an animated feature based on the same one-sentance premise.

A high-culture rat loses his home; his life literally going down the drain of a major European city. In the process he learns a little something about life, love… and how get cheap laughs from raw sewage.

A free-thinking ant in a close-minded hill proves hes no mindless drone when he falls for the princess and saves his colony from an army of bug-eyed badguys.

Duels are always released within one calendar year of each other.

Hand-drawn slapstick buddy picture set in ancient Peru follows the adventures of the Man Who Would Be King.

The moral of this story? Dont screw with the Jews from Malibu. They will band together like Voltron and leave you in the dust.

, but the title was changed for fear it sounded too much like

After reviving Disneys animation studios with

This one request wound up costing Dreamworks $4 million in expenses, as the animators had to change every scene to re-synchronize Shreks lips. Which reached for comment, Myers had this to say:

to the theaters by 21 days. Of course, the book

The following inaccuracies are listed on the Wikipedia entry for

There is no Dreamworks counterpart to Disneys

, Calvez nicely summed up the concept of these duels by sayng, The beginning of the story is the same, even if the scenarios then become different.

The Rules of CombatAduelis a pair of animated movies released by Disney/Pixar and Dreamworks/PDI (Pacific Data Images).

flamboyant heroes were… more than just friends. In the original script, Kevin Kline and Kenneth Branagh (who recorded their dialog together in the same booth, a rarity in animation), called each other pet names like darling. This was in addition to the Elton John soundtrack, Miguels low-cut he-vage blouse and the infamous skinny dipping hot tub scene.

5 Things Zombie Movies Stole from Night of the Living Dead

These films have the same premise, though the end result is often wildly different.

Heres a few more articles to keep you entertained.

This isnt about one company ripping the other off. Its about two mega-corps waging a very public war, with anthropomorphic animals as their soldiers and CGI as their weapon of choice.

was based on came out back in 1986. The Disney/Dreamworks feud is even fuzzier.

The notion that there are alligators in sewers is an urban legend. 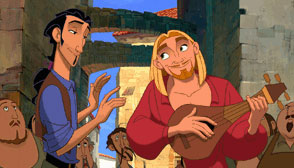 Ever sinceAntzandA Bugs Life, Disney/Pixar and Dreamworks/PDI have fought a series ofduels, with each releasing animated films with strikingly similiar premises. FromThe Wild&MadagascartoRatatouille&Flushed Away, Zeus exposes the gory details.