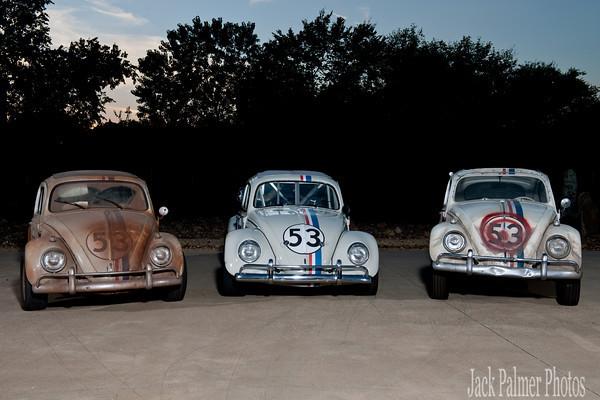 There are only 23 known original Herbie movie cars that are left in the world. (I dont count the dreaded Lindsay Lohan remake) Half of those original cars are in museums, so owning one of these cars is a pretty rare opportunity. Much like the chargers from the Dukes of Hazzard, quite a few VWs met their demise during the course of filming the original 4 movies

Thats the only sad thing about the Herbie movies, was that they had to destroy a lot of my beloved vintage Volkswagens in order to make those movies.

Outstanding. Theres just something so cute about these little cars that they are loved by the masses. I think I saw Herbie in the 60s at a drive-in theatre.. It makes a very attractive little racer 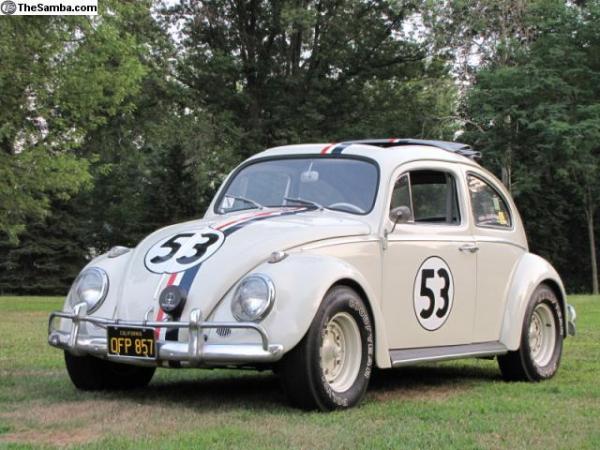 You are referring to Horace the hate bug, which was used in the 1997 made for TV version of The Love Bug. This version had Dean Jones playing a cameo role. You can see the entire hour and a half movie on YouTube. I like that version as all the bugs were righteous Herbies, unlike the Herbie Reloaded (2005) versions with the flared fenders, etc., not that I would blame Lindsay Lohan for that.

This Herbie maybe the most important of all the cars offered for sale right now. This is Herbie 12 and he was used inHerbie Goes to Monte CarloandHerbie Goes Bananas. This car had a lot of screen time and was one of the few cars that the actual actors drove in. This car was left for many years and had to have a complete restoration. It is now as good as the first day of filming. This car is being offered by another sellerhere on The Samba. They are asking $30,000, which seems fair considering its history and the fact that it has already been restored.

But take heart, the sacrifice of those bugs helped to make the remaining bugs more valuable today. Only God knows how many junker 58-63 sunroof bugs(the only years that can be made into a righteous Herbie without prohibitive cost) were saved from being chopped into a baja(an abominable fate that many fell victim to back in the 60s,70s, and 80s),or the crusher, because the owner saw the love bug movies. And therefore s/he had the foresight to restore it, or at least store it instead.

Kinda funny that the nay sayers who thought $30k was steep for an original Herbie. To think that I paid a fraction of that for my screen used Herbie. And to think that one sold after these cars were offered, at auction and it brought $66k. Say what you want. These are just like the Batmobile and the James Bond Aston. There were only so many made, and they arent making any more any time soon. So expect the prices to keep climbing.

The 12 car was not $8000there is a replica of it that was for sale for that in Orange County recently, but not the original. I know these cars and the collector and helped him with the collection at one point. Its a great bunch of stuffneeds to go to a museum where they can be shared.

I remember seeing the original movie as a kid at the Carlton Theatre in Red Bank NJ. They had one of the herbie cars in the lobby with giant sunglasses on it

I saw the original The Love Bug movie in New Hampshire in the summer of 1969 at a drive-in. Unfortunately, the mosquitoes bugged me so badly, that I had to see it again in a theater. 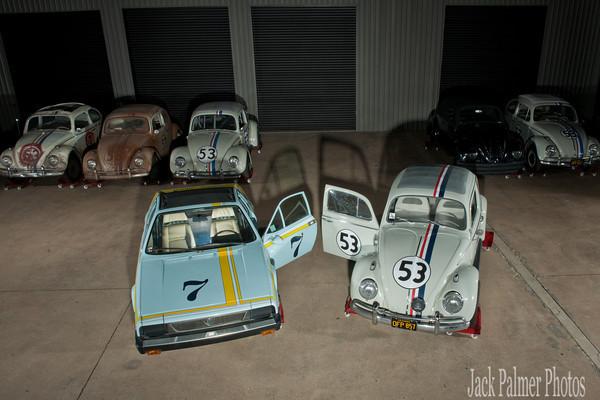 Sorry about that guys. I think we have the prices and sellers all straightened out now. Thanks for catching it.

Wasnt it oil? I remember the bad guy shooting oil at Herbie, James Bond style, during the big race. Loved The Love Bug, which came out when I was five. Any Disney movie with Dean Jones is GOLD!

I know of one that truly was a barn find(20+ years ago). Hes now sitting in my garage

I recently saw a modern VW beetle that was painted like Herbie. That was pretty cool.

Thanks for the info. about that Herbie, Tory. Interesting! It was cool that I had a chance to see it!

Even if we dont want to admit it, we probably all recognize these cars. The white Beetles with the number 53 on the hood should be especially familiar. They all represented one of the most famous cars to ever hit the big screen. Herbie stared in his first movie,, in 1968 and ended up being in five other movies. Disney built quite a few Herbies for each film, but there arent many still around. Reader Albert H sent in a tip about one of the original Herbies and after doing some more research we discovered this whole collection which is for sale.

i love herbie movies and this little car is so sweet.

Wow, that would be really amazing to find one of these cars in a barn!

I think the facts got screwed up somewhere in the translation on this one. Herbie 12, is being sold by a separate collector and is not part of the collection of 7 cars. And I know its certainly not only $8,000. The collection of 7 wont be broken up by the owner.

Notify me of new comments via email. Orsubscribewithout commenting.

Wow. I was going to say, a restored bug for 8K was a steal, not to mention the movie background. But 30K seems a bit tall. Neat collection. Love the muddy lookin one with the wiper smears. Winder how that is applied, and how permanent it is (hoping it IS permanent and wouldnt wipe off).

Also, they might look beat up. But theyre far from it when you look at the restoration photos of Herbie 12. When the cars were built by Disney, they were just beat up used cars. Heck in the Love Bug many were built from wrecks and were made from two or three cars.

This Herbie family is being offered for sale byColome Motorsand they hope to sell the whole lot as a package deal. Most of these cars are from the later movies, but there is one from the original movies. There is even the 1976 Lancia Scorpion fromHerbie goes to Monte Carlo. All of these cars have been well cared for and have documented histories.

I so much agree that this car collection should go to a museum where everyone can have the chance to enjoy them. At one time, I recall the Volks Wagon Dealership at Seaside, CA. had one of the Herbie cars on display. This car could not be driven as it appears most of the parts were taken out. It looks that the purpose of this Herbie was for comedy scenes as there was a lever inside the car that made the hood open and a human-like tongue flap. When the headlights should have been there was actually these silly eyes with eye lashes that could be moved by the levers inside of the car. I do not think they have this Herbie car there anymore on display. That was pretty cool to see.

I am the proud owner of Herbie 12. I dont want to sound biased or push the product, but Im just chiming in to clarify that the price of this incredibly rare car is indeed $30,000. Original Herbies in the past have sold time and again for figures between $35,000-$60,000. The economy is definitely not what it once was so were prepared to take a much lower figure. Thanks for looking! I hope the site administrator can edit the ad correcting the mistake.

Amazingly, that Herbie was owned by none other than Dean Jones. He displayed the car the the dealership-the owner being a personal friend of Mr. Jones. This was actually the original parade car used at Disneyland for many years. It was gifted as a sign of thanks for all Dean had done for Disney over the years. Its now in private hands in Burbank.

These may just be a bunch of beat up old Beetles, but we think they are worth preserving. Buying this package deal seems like a good way to start your own auto museum. In fact, if you are able to get non-profit status, this could even be a tax write off! We would like to thank Albert for sharing his interesting find with us.