Fires of Hell be damned, I took Sister Glorias advice that day and enjoyed the shit out of FOR YOUR EYES ONLY with my Dad. But to be fair, I enjoyed every movie I ever saw with my Father. Some were good, some werent as good, but none of them were ever a waste of our time time we spent together. And as much as Id always been a movie brat, that month was where my lifelong love affair with cinema began in earnest. Movies were so revered in my family, I was encouraged to lie (a sin!) to my teachers so I could circumvent the system and play hooky at the picture show. With an adult who was supposed to have known better, no less.

So I put on my Catholic school uniform of green slacks, sweater and tie with a white button-down shirt, walk up Miller Hill to Our Lady of Perpetual Help school, and head to the office to tell them my Dad is picking me up at lunch again. The reason for the early dismissal? My Moms Great Aunt has passed away and we need to go be with the family.

Sister Gloria Louise says Seems like a lot of Great Aunts are dying in your family this month, Mr. Smith.

What do I tell Sister Gloria Louise? I asked my Mom.

Yes. God DOES punish. Remember that, she said, heading away from the front desk to her office. And just before she closed her office door, Sister Gloria Louise added Enjoy your movie

MY DAD AND HOW HE MADE ME LIE TO THE CLERGY

So the next week, me and the Old Man wanna see SUPERMAN II. Again, my Mom instructs me to tell the Sisters the family is rushing to a funeral for a fallen great aunt. The Principal, Sister Gloria Louise, seems to buy it. Im a 10 year old Catholic boy in 1981, so I must be telling the truth, right?

I say Yes, Sister. God must be punishing them.

If he was still with us here in the land of the living, today wouldve been my Dads 78th Birthday. This photo, taken at the party after Harleys baptism, perfectly sums up the dynamic of our relationship: we looked at stuff together in silence. Whether it was a George Carlin album as it spun on a record player or CARLIN AT CARNEGIE as it took over the TV in the early days of HBO, the time my Father and I spent together was always about watching stuff. And mostly, that stuff was movies.

Turns out he DID know better. When I grew up, I made movies for a living. Some were good, some werent, but none of them were ever a waste of my time. Because each one is a mini-monument to the man who made me. JERSEY GIRL was the last of my flicks he got to see, and while some may snark thats what probably killed him, I know better: I was there when he watched the flick the first time. I saw him cry and it wasnt because he was thinking My kid just ruined his career The man of few words told me EXACTLY what was on his mind after the movie ended.

The original Silent Bob himself, my Old Man always took me out of school at noon on Wednesdays to see a $1.50 matinee at the now long-gone Movies at Middletown (located on Highway 35 and Palmer Ave, as the answering machine message with the movie times would remind any caller). In doing this, a Father was subtly teaching his butterball, silly-hearted youngest child that everything in life came secondary to a good movie including my education and my God.

See, Dad didnt really ever talk that much. Not that he didnt have anything on his mind: he was just self conscious as a motherfucker (which he, in fact, literally was). Dad had been born with a hair lip and a cleft palate, so his whole life, he tried to keep his mouth shut so as not to gross everybody out even his kids. Can you imagine? The Father of the guy who does 69 different podcasts a day was pretty tight-lipped. Its likely the reason I talk so much: there must be some subconscious desire to say all the stuff my Dad was too trapped inside himself to express. 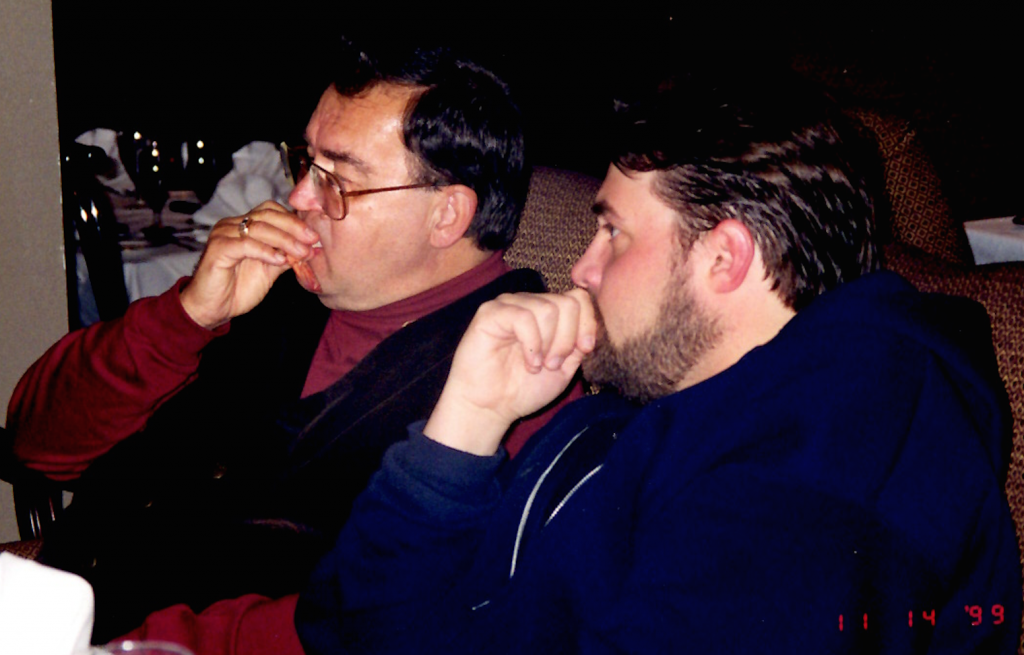 The first time the Old Man decided to pull me out of school early to see a flick, my Mom told me to tell the Sisters that I was missing Religion class because a Great Aunt had died and we were rushing to a last minute funeral not that my Dad wanted to see RAIDERS OF THE LOST ARK for cheap mid-week. The movie rocked, of course not just because it was Lucas and Spielberg at their best, but also because it was transgressive to be in the cinema at all when I was supposed to be learning about Christ. And my Father was not only not punishing me for lying to a grown-up, he was complicit as well! The next day, I tried to explain to my best friend Ernie ODonnell two very controversial points Id learned while studying a mid-afternoon movie instead of the Bible: 1) My Dad was cool, and 2) Indiana Jones was like an American James Bond.

Thanks, Dad. I miss you. I hope you had the time of your life.

My Old Man was a huge James Bond fan, so for a third consecutive week in a row, Dad wanted to yank his youngest out of class to see FOR YOUR EYES ONLY. We didnt really talk after the movies, but the old man always had plenty to express after a Bond flick usually regarding Roger Moore being an okay 007, but Sean Connery being his favorite. And Id listen with great attention, like it mattered because it was really something when the Old Man has something to say.

So its my last week in Fifth Grade and Mom urges Dad to bring me to Bond on the upcoming weekend instead. But the Old Man wont have it: the weekends are too crowded at the multiplex, and the tickets cost nearly double. Pop doesnt care if Thursday IS the last day of school: hes picking me up at noon on Wednesday to see this new Bond flick, and the only thing thats gonna stop him is a license to kill.

And rather than flip the script, my Mother stuck with a classic: Tell her my great Aunt died.

After we got away with movie matinee hooky, Pop decided that was gonna be our thing: every week, hed sign me out of school early and wed go to the movies. I was the third of his three kids, disinterested in country music (his passion) and less interested in sports (his pastime). But I LOVED television. I LOVED the movies. And this was the common ground upon which my Dad and I would build the foundation of our relationship: watching entertainment together, generally in silence.

That was good, said the man whod introduced me to the very things that would consume the remainder of my days. And George Carlin was great.