In many ways, the indie games scene is the perfect underdog story: colorful, larger-than-life characters that dream big and follow their own destiny. In trying to capture the eccentricity, outbursts, and irregular sleeping patterns of creators like Fish, Team Meat and Blow, Pajot and Swirsky knew they had to create an aesthetic that would not only allow for drama, but also lend itself well to an audience unfamiliar with indie game development or the wider gaming industry. The pair arrived at two key works: the Gary Hustwit documentaryObjectified(and, to a lesser extent, sister worksHelveticaandUrbanized); and Seth Gordons 2007 critically acclaimed documentaryKing of Kong.

The documentary is the result of a year-long project documenting the creative processes of four independent game developers: Phil Fish (Fez), Edmund McMillen and Tommy Refenes (Super Meat Boy) and Jonathan Blow (Braid). Although more than familiar with gaming and its subcultures, Pajot and Swirsky knew little about who was making waves in the independent development community at the start of 2010. After months of research, they put together a list of roughly 20 up-and-coming names, and not yet sure of the final direction the film would take, they decided to meet with the first names on their list–Edmund McMillen and Tommy Refenes–to shoot an initial test piece.

What was so funny about it at the time was that we were so confident and so passionate and excited about it that we didnt really think about how long it would take us to make this movie or the risks involved, Pajot says. We just wanted to do it. And then we had to actually make it, and we realized it was hard and it would take a long time. 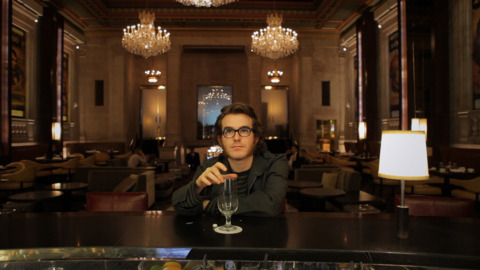 I hope people walk away from this film realizing that theres a connection between a video game and the person who made it and that games can be and say something much more than just pure entertainment, Swirsky says.

The reaction was more than Pajot and Swirsky could have ever hoped for: It was Phil Fish, crying in his lounge room.

In the end, we spent so much time with these guys and captured their story, and they opened up to us in a way that we never thought possible. They were so incredibly open and honest that we felt a certain sense of preciousness about their story and how we needed to portray it. We got very attached and protective of it. In the end, we just wanted to know that we did right by these people whose stories we fell in love with.

The stories of Team Meat and Fez got so dramatic and so compelling that to do them justice, we had to make room for them, which meant cutting everything that wed worked on up until that point, Swirsky says.

After completing an early draft of the film late last year, Pajot and Swirsky decided to do a test run on the very people whose lives the film follows, resulting in a few nerve-racking days travelling across the country.

There we were, doing corporate and commercial stuff, and suddenly, we stumble on this story of indie game development and give up all that other stuff up and decide not to get paid for a while and go ahead and make a film, Pajot says, speaking on the phone from the studio she shares with Swirsky in Winnipeg, Canada, just minutes after putting the final touches onIndie Game: The Movie.

Pajot describesIndie Game: The Movieas a drama with some design talk, navigating between the different creators and their lives to create an overarching narrative that asks questions about the creative process and the role of the individual artist. It also delves into that other, more contentious and oft-tread territory: the artistic nature of video games themselves.

The project made a deep impression on Pajot and Swirsky. Holowka had unknowingly introduced them to an untapped source of storytelling material, full of the kind of passion, heartbreak, and perseverance that make for compelling viewing. As they wandered the halls of the Independent Games Summit at the 2010 GDC, talking to indie developers, designers, and gamemmakers from all over the world, Pajot and Swirsky found what they were looking for: a story waiting to be told.

In other words, being indie is not a choice.

Independent game developer, designer, and gamemaker Phil Fish is crying silently on his couch in Montreal, Canada. Next to him, colleague and friend Ken Schachter is watching the credits on Lisanne Pajot and James SwirskysIndie Game: The Movieroll on the small television screen at the back of the room.

It was funny to discover all the parallels between us making this film and the guys making their games. I think you can watch this film and you can take out every reference to video game and swap it for book or film or music and the message would stay the same. Its really just passionate people who are expressing themselves through hard work, creativity, and sacrifice. Its a universal story.

But its not the kind of passion that suits everyone. What Pajot and Swirsky discovered while watching Fish and Team Meat at work is that these developers will never have nine-to-five jobs (in as much as any game developers job is nine to five). Working for someone else, much less going into an office or studio every day of the week, is just not how they work. Despite their respect for AAA games and AAA game development, theyre simply not interested in working that way. In many ways, their passion springs from solitude, protecting them (or at least, in their minds) from the risks that come with remaining indie and working for years on end on a single project without knowing whether its going to pay off.

Two years ago, Pajot and Swirsky, two Canadian filmmakers who once upon a time worked solely on corporate and commercial projects, prowled the halls of the Game Developers Conference (GDC) in San Francisco in search of a good idea. A few months prior, the pair had been commissioned to shoot and edit a five-minute profile piece on Alec Holowka, cocreator with Derek Yu of the critically acclaimed 2007 Independent Games Festival winnerAquaria, a 2D side-scroller about an underwater-dwelling called Naija.

The two filmmakers slowly made their way down the list of 20 developers, shooting interviews with everyone from Ron Carmel (2D Boy) to industry wunderkind Jason Rohrer. But it wasnt until meeting Phil Fish and witnessing the moments of genuine madness that go into making an independent game that Pajot and Swirsky decided to switch gears. The new focus of the film became Fish, Team Meat, and Jonathan Blow, with the former slaving to perfect individual projects ahead of release and the latter struggling with the success of Braid. (A special edition of the film, to be released afterIndie Game: The Movie, will include all Pajot and Swirskys interviews.)

Depending on its reception at Sundance, Pajot and Swirsky will then begin to work on a national distribution plan for the film, including film festivals, game conferences, and a possible theatre release, before officially releasing the film on DVD and digital at the end of this year.

Later that night, Fish tweeted: Five to 10 years from now, indie kids are going to be asked: What made you go into indie games? and theyll say:Indie Game: The Movie.

Pajot and Swirsky used the test piece they shot with Edmund McMillen and Tommy Refenes, aka Team Meat, to drum up support for the project on creative funding platform Kickstarter and eventually raised enough money to begin preproduction on the film. (As a pledge of good faith, Pajot and Swirsky continued to post videos throughout the projects development, which came to some 88 minutes of content.)

The majority of Pajot and Swirskys nervous excitement at the news stemmed from the fact that only about 15 people had actually seen the film in its entirety, meaning Sundance will be a big, scary test, as Pajot puts it, for mainstream audience reaction.

Thats when it clicked, Swirsky says. In the middle of it, Lisanne and I just turned to each other and had the same thought: These stories need to be told.

Any game thats made, be it indie or AAA, is a miracle, Swirsky says. The simple fact that games actually ship–and work–is a miracle. You could go through Super Meat Boy or Braid or Fez and just look at all these little points in these games where if it had gone the other way, if one little detail had slipped the creators mind, the game would not have existed. Games are all little miracles.

It must have been surreal for these guys to watch themselves go through some the most stressful things theyve ever gone through in their lives, shot with two cameras, set to music, augmented with graphicskind of like the most surreal home video theyve ever watched, Swirsky says. We didnt know what to expect. We had no idea how theyd react.

Fishpauses for a moment, takes off his glasses to wipe the tears from his eyes, and says:

In this sense,Indie Game: The Movieis a cautionary tale. Pajot and Swirsky were particular about capturing the moments of doubt and frustration that plagued all the developers in the film; if not to balance the moments of triumph, then to present as realistic an interpretation as possible about what it means to be indie.

Just days before this interview,Indie Game: The Moviewas accepted to be part of the 2012Sundance Film Festivalofficial selection, premiering on January 19 to a room full of critics and film buffs in Park City, Utah.