The Flash War Ends in THE FLASH 50 (Exclusive Preview)

Meanwhile, this guy is obsessed with letting creepy things crawl all over him.

How the OBI-WAN Spin-off Is Secretly Moving Forward

The Shimmer and Ending of ANNIHILATION Explained

But what about you? Would you be able to let one of these things crawl over your face, or would you burn down your entire house instead? Tell us in the comments below.

.I need a shower. Two showers.Long showers.  Also I need to destroy all the moths, before they accidentally get exposed to radiation and kill us all. [Editors note: I want this bug on my face.] The good news is the atlas moth is the largest in the world, so they dont get any bigger than this. The bad news is LOOK AT THIS THING. Or dont, that works too. 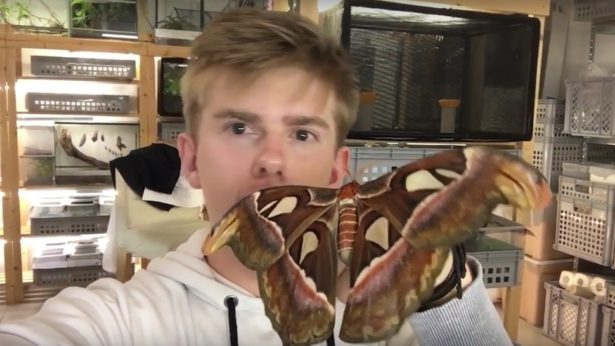 Dear god. He hasso many of these, but I cant watch anymore. Im not even over the moth yet!

Bug hand-puppet with a human faceisunsettling.

This video (that came across this mini horror filmat Laughing Squid) was shared by German insect breeder Adrian Kozakiewicz on his YouTube channelInsecthausTV. This atlas moth is actually quite stunning to look at on its own, not just because of its size but because of the pattern on its body wings, but that doesnt matter here. When a bug the size of a human head is hanging out on your face youve crossed the threshold from appreciation to abject terror.

Take anybug, no matter how adorable or innocuous, and increase its size enough, and youre going to end up with something horrifying. Thats true even for amoth, because at a certain point it goes from harmless flyinginsect to soaring nightmare of certain doom. But you dont need a sci-fi movie to know that, you can just watch this video of a giant moth crawling over a mans face.