You wont be gambling with this new book 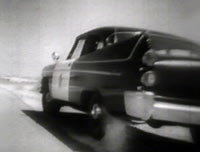 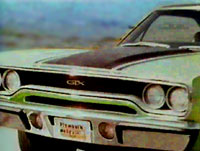 This was the last gasp for a proud line of hot cars. Muscle cars were massive in bulk and way too heavy by 1970, averaging a mere 8 miles a gallon.

Cal Worthington based his ads on those by California legendChick Lambert and his dog, Storm. Chick veered off the script one day to record this unbelievably funny (and profane)take-off on TV used car salesmen.

In this spot, ladies and gents dance and sing around the new Super 88, Dynamic 88, and Ninety-Eight luxury cars – a Rocket V-8 powered vehicle redesigned to be sleaker than the bulky designs earlier in the decade.

Between 1970 and 1977, cars got small and exceedingly ugly. Chrome and metal turned to plastic and the Ford Futura in particular was a noxious piece of crap. Notoriously unreliable but there are still a few on the road.

Buicks answer to the VW bug used humor in their ads – as Volkswagen had done so successfully.

One of the many Shell Challenge spots. Two cars with a full tank of gas set out at the same time – will the car with Platformate outlast the car running on regular gas?

To accent the high-tech nature of the push button 1957 Swept-Wing Dodge, the car is compared with the latest in TV technology, offering us an opportunity to view a 1957 television camera close up.

They even stripped the car down to the chassis and shot it out of the cannon again to demonstrate durability. If you ever longed to see a 58 Dodge dissected to the skeleton and rolling down the road, this is the commercial for you!

(With the 1956 models, the Ford Motor Company began to take passenger safety seriously with the introduction of padded instrument panels, sturdier steering wheels and seat belts. In spite of this, there was tremendous resistance on the part of consumers to using those seat belts.) 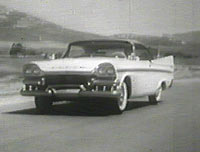 This is probably the funniest clip onTVparty!TV Commercials on DVD 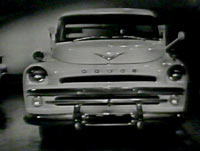 The 57 Chevy is an American icon, but the Dodge pickup that year was its poor cousin.Still, the D100 half-ton was a solidly-designed truck, available for the first time with power brakes, power steering and a push-button, three-speed automatic transmission.

Thats a young Diane Keaton in the drivers seat in this commercial.

Cal Worthington made the phrase Ill stand on my head to sell you a car famous. Indeed, his commercials feature the dealer going to great lengths to get your attention, making him one of the most recognizable personalities in the LA area.

A memorable, lighthearted spot for AMCs compact car – showing a driving instructor who (literally) runs into all kinds of trouble with his hopeless students.

Felix Chevrolet in Downtown LA is one of the oldest dealerships in Los Angeles – maybe in the country – opening the showroom doors in 1921.

You gotta love a commercial that invites you to – Lean back and look – look at patterns. This is what a convertible was made for. To watch the blue world as it turns. 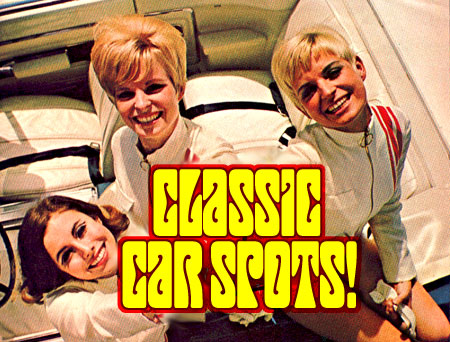 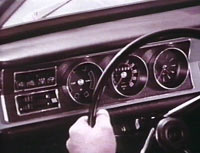 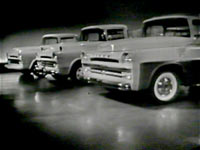 If youre a fan of the 70 Barracuda or the GTX convertible (as I am), youll love the shot of these large, lurking monsters roaring down the road.

This kind of big production number-style advertising came back in style briefly (and better than ever) in ads for Mountain Dew, Old Navy and The Gap in 2000 – but in the case of The Gap, it was a resounding sales failure.

Poking gentle fun with their products image was a risky tactic, and sales werent the greatest for AMC in 1968.

Javelin was AMCs ugly duckling muscle car – here a modest accountant-type is carefully driving his Javelin while other drivers want to challenge him to a race (or blatantly come on to him).

What if there was a flat tire – and no man around? Thats this womans anguish. She needs the tire with the built-in spare.You gotta get off those Firestones, girl!

Ad for the 1970 Dodge Charger… what a beautiful car that was! 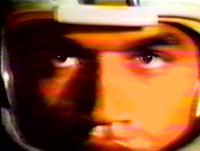 In the expanding boom economy of the late fifties, television changed the face of advertising forever.Magazine readers and radio listeners were used to celebrity endorsements but with television you could actually see and hear your favorite star interacting with the sponsors product in your own home – for the first time.

These commercials were also subtle social cues as to which cars were meant for women or men.

The Dodge Coronet coupe was the vehicle of choice for California Highway Patrol cruisers in 1957.

Women drivers were a standard TV joke in the Sixties – so much so that,even today,a bad driver up ahead is usually assumed by many to be a woman.

Those Daring Young Men In Their Flying Machines was Plymouths slogan for their failed attempt at marketing their fading, bloated (but stylish) 1970 muscle car line.

Louis Prima, Jerry Vale and Las Vegas in the 1970s!

There were a number of variations of this campaign, in this one the cars are driven by women – as if that mattered!

Panels on the back of the car flipped up when the car ran out of fuel. Watching cars run out of gas was inherently more interesting when gasoline was less than 20 cents a gallon – not so fun today.

A fixture on Northern & Southern California television sets since the 1950s, Cal Worthington and his dog spot (which was anything but a dog, most likely a large circus animal) will do anything to sell you a car at his big friendly supermarket of cars and trucks.

When an automaker chooses a spokesperson for their product line, they look for someone strong, dependable and trustworthy. A person of solid integrity who reflects the stability of the car company itself.

Thats why Chevrolet chose O.J. Simpson to appear in their 1970 Chevy Nova commercials. 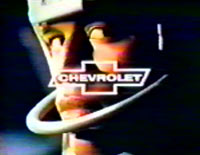 Should a single girl buy a 1966 Mustang? Thats the burning question posed here. Success and marriage are right around the corner if you do, at least according to the fine folks at Ford. 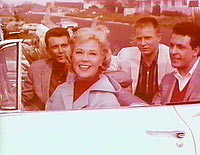 This early-1970 adis typical of the late-1960s style of TV hard-sel, the long format ad that ran on the Late-Late Show.

Richard Dreyfuss in a 1970 Javelin commercial. 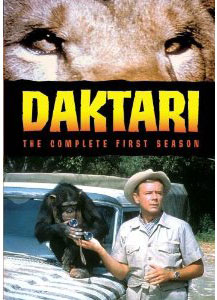 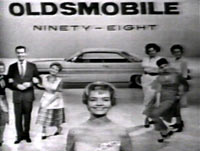 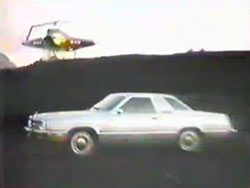 Heres another comparison – if the Nova killed anybody it was probably an accident.

The American automakers really knew how to design cars in the fifties – and they got pretty sophisticated at selling them on television as well.Thats because they had a lot of money to spend!

Featured here is a three-minute video collecting many of of Cals greatest stunts from the late-sixties and early-seventies.

When he turns the car over to the parking garage attendant, the kid peels off.

A handful of celebrities gathered on a soundstage in 1957 to endorse this line of new Ford tank-like vehicles.

The Ford Mustang introduced a new era in car making and merchandising – an affordable, sporty, small (by 60s standards), well-designed automobile marketed primarily to women. Enough men bought the Mustang that Ford repositioned it as a musle-car a few years later.

Cars with fins were on the way out by 1958 – Buick was lucky,The Airborne B58 Buick was equipped with a B12000 engine and Dyna-Flow transmission.

drives a 1970 Mustang convertible and briefly worked in automotive advertising)

Cals been using this same jingle for almost forty years and no wonder – its one of the catchiest ever written.

That had never been a problem with plentiful gas stocks, but the gasoline price hikes and oil embargoes of the early-seventies put all of Plymouths muscle cars out to pasture by mid-decade.

A classic illustration of advertising at its best, this spot shows you how easy and economical the bug was to fix – and the ending is a real twist. You may have to see it again to believe it, I did.

1965 Chevy line presented by the Bonanza,

The announcer was future20/20host Hugh Downs, look for Arthur Godfrey, Dick Powell and Tennessee Ernie Ford (all popular on TV at the time) in this fall commercial than runs for over three minutes.

From 1956-1988, Dodge sold cars to the CHP – now they primarily buy Ford Crown Victorias and Camaros.

The automakers entire product line in the Seventies was a total embarrassment, culminating with the laughable AMC Pacer (Waynes World). (That statement is strongly disputed by AMC lovers around the country!)

The elaborate set-ups include hanging upside down from an airplane, riding a whale and being mauled by lions, tigers and bears – oh my!

Pop star Dinah Shore starred in this exciting, elaborate presentation that was flawlessly executed; everyone looks great, the music is snappy and even the helicopter lands on cue; a fine example of old-school bigger-is-better advertising dynamics at work.

Is this a car commercial or an acid trip?!?

In this commercial, we are shown the sleek CHP headquarters in LA along with chrome-rimmed, black and white Dodge beauties hurtling through the desert thanks to torsion air suspension.

Observe what Dodge called the Giants of the Low Priced Three. The Dodge Power Giants were available in one-ton models with a 315 cid V8 engine packing 204 horsepower. You dont see many of these trucks restored and on the road today – they were all worked to death!

This car was unique because you would actually change the gears by pushing buttons on the dashboard. Available with Torsion-Aire Ride, four barrel carbs and a 354 cid Hemi V8. And dont forget the realm of silence ride.

Fly the new Suburban – the latest in space-age design with fold-down rear seats and a back window that goes up and down with the flick of a switch. This ad used airplanes as a metaphor for the family car, a common theme in auto advertising. After all, this was the Jet Age.

This was the height of the golden age of early V-8 Pickups; but the sleaker, meaner-looking Chevy trucks were solidly number-one in sales in 1957.

This is a prime example of a style of advertising that was popular decades ago, the big musical production number. 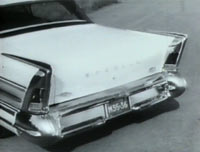 Dodge shot one of their 1958 model cars out of a cannon to prove their Swept-Wing autos were sturdy enough to take the punishment. Heck, they designed the damn things like a bullet anyway!

The 58 Buick had a lot of chrome and this spot gives you tight closeups of the remarkable metal work that adorned these 3,000 pound behemoths.