Basically, Bee Movie Game is an age-appropriate take on the Grand Theft Auto formula. Instead of the mean streets of Vice City, players freely wander a colorful replica of New Hive City. You can explore the hive, talk to people, and take jobs at your leisure. In turn, those jobs give you money that you can use to buy clothes for Barry to wear, cars to fill his garage with, and arcade games to play. When you feel like tackling a mission, all you need to do is visit Barrys house to move the story along.

You shouldnt hesitate to check out Bee Movie Game if you have children in the house who you think would enjoy spending time in Barry B. Bensons universe. Indeed, Bee Movie Game is one of those rare video games developed with younger players in mind that doesnt totally suck. You wont feel compelled to play it for hours (or possibly even at all), but your kids or younger siblings will. 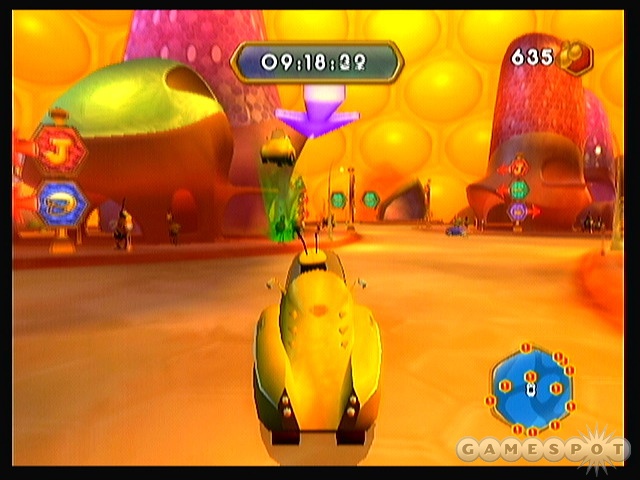 Dogfighting wasps and dodging cars as a bee is neat

The Xbox 360 and PlayStation 2 versions of the game are virtually identical. Sure, the graphics in the 360 version are cleaner and more detailed, but the PlayStation 2 serves up the same environments with only a slight downgrade in draw distance and animation smoothness. The Wii version looks practically identical to the PS2 version, though the cutscene video is poorly compressed and extremely grainy looking. Normally that wouldnt be such a big deal, but Bee Movie Game frequently juxtaposes gameplay and video, and often blends the two together. Those thrilling chase scenes that are packed with oncoming vehicles seem a lot less thrilling when the cars and road are made up of polygons one moment and grainy footage the next.

Race, chase, and fly your way through this game, based on the upcoming animated film.

Lastly, the controls in the Wii version were modified to make use of the controllers pointer and motion-sensing capabilities. Youll often have to shake the remote or Nunchuk to interact with objects, and the pointer is used for aiming and activating hot spots during the interactive flight sequences. On the Xbox 360 and PS2, you just press the button displayed on screen. On the Wii, a target appears instead, which you have to aim at and press B to activate. These Wii-specific control enhancements take longer to get used to than simply pushing buttons, but they add a layer of interactivity to the experience that the 360 and PS2 versions dont have.

Anyone too far over the age of 10 probably wont get much out of Bee Movie Game, but the younger children in your household just may delight in its sweet flavor. The gameplay isnt complicated. In fact, its usually downright simple. However, the various missions and minigames offer plenty of different things to do, while the cheerful presentation and humor go a long way toward making every minute spent with the game enjoyable.

In terms of content, every version of the game lets a second player join in for certain arcade games and races. The 360 version levies the Xbox Live service to let you compare your scores against those of other players, but its two-person multiplayer is limited to offline matches only, so theres no advantage there. The Wii version of the game includes four extra minigames and three additional racetracks that the other two versions dont have. Navigating the hive is much easier in the Wii version of the game, because the developers placed signs that tell you where everything is located, and they implemented kiosks that let you select jobs and then point you exactly where you need to go to do them.

The games graphics dont push the visual capabilities of any of the systems its on, but New Hive City is a colorful, cheerful place. The different wax-sculpted buildings look exotic, and the city is loaded with bees walking on the sidewalks, driving cars, and mingling with one another. Outside the hive, the different locations in New Hive City are expansive and richly detailed. Parks have streams, flower beds, and frogs. City streets have benches, trash bins, and cars that you can use to shield yourself from the rain. If you notice a human walking by with an umbrella, you can take cover under it. One mission takes place inside a three-room apartment, where you have plenty of furniture to navigate and three angry humans to watch out for. The flight sequence missions depict intense scenes in which Barry is ducking under multiple oncoming vehicles and dodging humans and animals alike. These scenes seamlessly mix game-engine graphics and video footage to make it seem as if the game console is pushing way more polygons and objects than its capable of.

Of course, honeybees dont like to walk around. They like to fly! Thats the key difference between the Bee Movie Game and other movie-inspired video games. The 21 different missions that take place outside the hive are set in large 3D environments that you fly around in. In some of them, you fly around freely and use Barrys pollen gun to shoot at wasps and to transfer pollen from healthy flowers to those in need of rejuvenation. AMatrix-style bullet time effect lets you slow the action down in order to line up precise shots. It also comes in handy when rain is falling, allowing you to see and dodge individual raindrops. In other missions, Barry follows his flight path automatically, but you have to quickly press the indicated directions and buttons when the prompts appear in order to help him avoid hazards along the way. These interactive Dragons Lair-style missions depict thrilling flights through traffic-heavy New Hive streets and battles against deranged humans armed with such deadly implements as rolled-up newspapers and shoes.

SNK 40th Anniversary Collection Review – It Belongs In A Museum

Cities: Skylines – Industries Review – The Up And Up 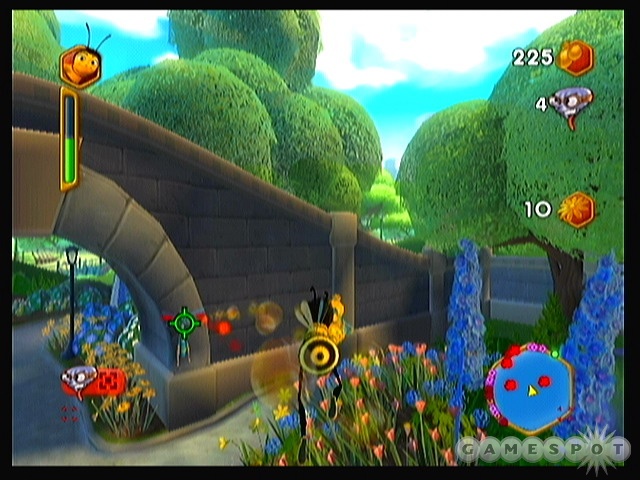 Missions and minigames wont challenge anyone past their teen years

Graphics dont push any of the systems the game is on

In this sandbox-style game, players take control of a honeybee named Barry B. Benson–voiced by Jerry Seinfeld–and interact with the people and places of New Hive City while completing missions based on scenes from the movie. In the city, you can take various jobs, goof around with stand-alone arcade games, and collect new outfits and cars to doll Barry up in. Outside the city, youll embark on missions that involve pollinating flowers, navigating torrential rain showers, terrorizing humans, and trading stinger fire in airborne battles with enemy wasps.

The missions have to be played in order, at least at first, but you can partake of everything else at your leisure. And theres quite a bit of everything else to waste time with inside the hive. You can drive cars around and take jobs that involve racing, delivering food, or shuttling other bees to various destinations. Driving recklessly in the Crazy Taxi-inspired taxi driver game is a riot. Other job sites around the hive let you participate in minigames that involve fixing cars, collecting honey, pouring honey, and packaging honey. When youre not killing time working, you can visit the arcade and play six simpleBee Movie-inspired games that are eerily reminiscent of classics like Space Invaders, Frogger, and Galaga. In all, there are more than two dozen activities to try, and they all offer multiple challenge levels.

The Quiet Man Review – Silent, But Not Golden

Two dozen different jobs and minigames to kill time with

Though clearing the skies of wasps and watching Barry dodge cars is exciting, the missions do start to feel repetitive after a while. Theyre not terribly challenging, either, since the only major penalty for running out of health or pressing the wrong button during an automatic flight sequence is that youll have to do a tiny portion of the mission over again. Inside the hive, the jobs and minigames are kind of simplistic. The crane-based honey-gathering game merely entails moving the directional stick to steer the crane and pressing a button to grab the honey capsules. When youre driving a car, the controls let you steer, accelerate, and reverse. The racing challenges add power-ups, such as bee missiles and honey puddles, to the mix. Unfortunately, the CPU opponents are easy to overtake and dont use items very well. On the whole, the game is definitely geared toward younger players who likely wont spend much time with any one single task, and who probably wont mind that the tasks are simple and only occasionally challenging.

All the while, the music varies between whimsical and dramatic, and theres oodles of spoken dialogue. The humor is aimed at kids, so you probably wont find any of it funny if youre beyond grade school. However, the actors deliveries, particularly that of Jerry Seinfeld, come across as natural and upbeat.