Top 20 Songs About Storms and Hurricanes

Search for movies, songs, or artists:

6 – Phase IV(1974) An organized hive of ants takes over a science lab, and then a whole town. One of the best insect movies of all time; by far the best ant film. 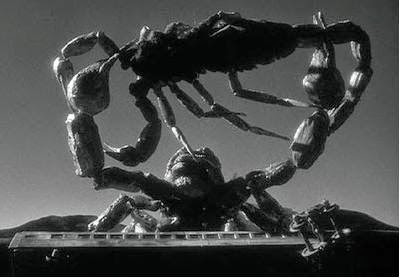 14 – Bug(1975) an earthquake releases carnivorous roaches which attack a city.

11 – The Fly (1958)Vincent Prices original masterpiece about a man turning into a fly.

A collection of the best of pop culture: lists about movies, books, songs, and TV.

4 – Mimic(1997) Excellent movie about human sized insects living among us, mimicking us.

Honorable Mention: King Kong (2005) had some spiffy giant roaches on the island.

Its the insects that are giant, not the films. The actors are usually the lesser characters, while the insects are the stars of the movie. Spiders are not insects, so you need to see theSpider filmlist for those. Were including ants, bees, cockroaches, worms, mosquitoes, and mutant bugs. This is the official Top2040 list of top 40 killer insect movies.

5 – The Deadly Mantis(1957) classic film! Scientists release a frozen giant mantis in the Arctic. It flies to New York and terrorizes the city.

37 – Centipede(2004) trapped in underground caves with a giant centipede

24 – Mosquito(1995) a spaceship crashes in a swamp in the U.S., and mosquitoes feed on the alien corpses, causing them to grow to the size of carnivorous birds.

1 – The Mist(2007) based on Stephen Kings novella, giant insects enter from another world.

Best Spider Movies of All Time: Killer Tarantulas on Film

10 – Creepshow(1982) in the 5th story Theyre creeping up on you! cockroaches take over an apartment.

36 – Mansquito(2005) a psycho prisoner is transformed into a giant mosquito.

12 – Empire of the Ants(1977) written by H.G. Wells. Organized giant ants have taken over the Florida everglades.

22 – Infestation(2009) Giant insects take over the world in this post-apocalyptic dark comedy about alien insects, spiders and zombies, and a few mutant hybrids.